Home Groningen Going back in time in Bourtange 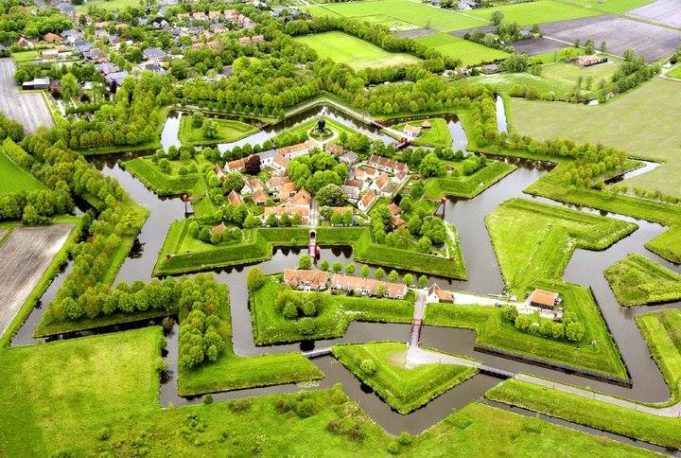 Did you know that Bourtange was created during the Eighty Years’ War (1568-1648) when William I of Orange wanted to control the only road between Germany and the city of Groningen?

The fortifications around the village are built in a star shape to make it easier to protect from cannon fire.

How to get from Amsterdam to Bourtange

Sadly there is no easy way to travel from Amsterdam to Bourtange by public transport.

You could travel to the city of Groningen by train. From there you take a local train to Winschoten (23min), then transfer onto a bus to Stadskanaal and exit at Vlagwedde. From there it’s another 11 minutes bus ride to Bourtange.

Alternatively you can take a train from Amsterdam to Emmen. From there you need to transfer onto three (!) different buses: Emmen to Ter Apel (28min), Ter Apel to Vlagtwedde (29min) and Vlagtwedde to Bourtange (11min).

The 9292 website helps you to plan your journey to Bourtange. Fill in ‘De Vesting, Bourtange’ for the closest bus stop near the fortress.

Saturday 2 and Sunday 3 June
Battle of Bourtange
More than 400 re-enactors will inhabit the fortress. Besides spectacular battle around the fortress you can also see the daily life of the 17th century. As if the Dutch war of independence is still in full swing.

Saturday 21 and Sunday 22 July
Fortress Spectaculum
Travel back to Burgundian times. Be surprised by the skills of artisans, the arts of jugglers, acrobats and fire-eaters. Enjoy the cuisine of the past and of course there is music and dance.

Saturday 27 and Sunday 28 October
Magic Samhain
Samhain is a Gaelic festival marking the end of the harvest season and the beginning of winter, or the ‘darker half’ of the year. During this period the earth can prepare for a new beginning. Experience one of the oldest festivals of mankind at a magical place. Various artists, stilt walkers, elves, witches and other magical creatures roam the fortress. Spectacular fireworks show on Saturday evening.

Spend the night in Bourtange