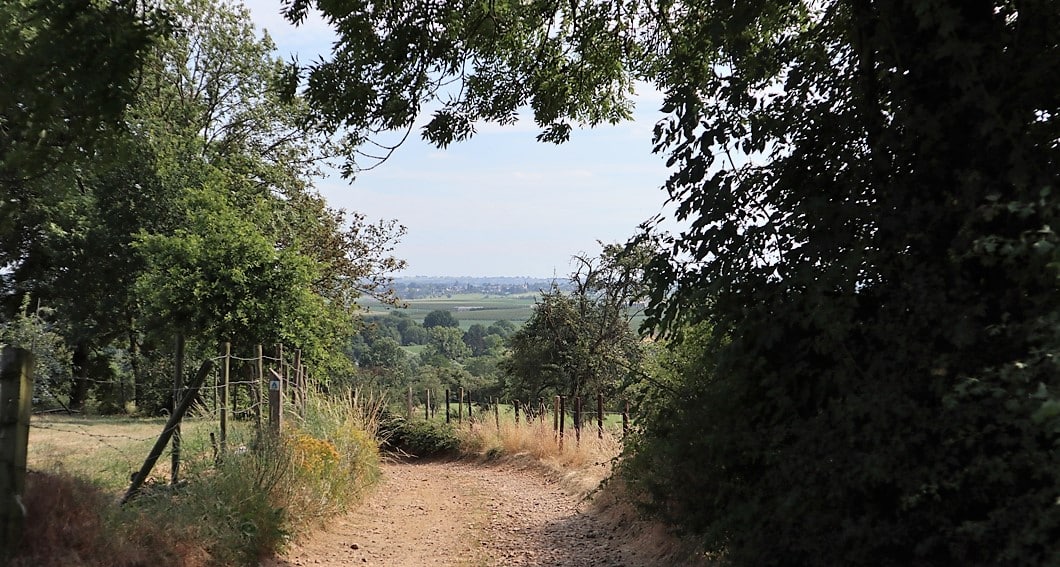 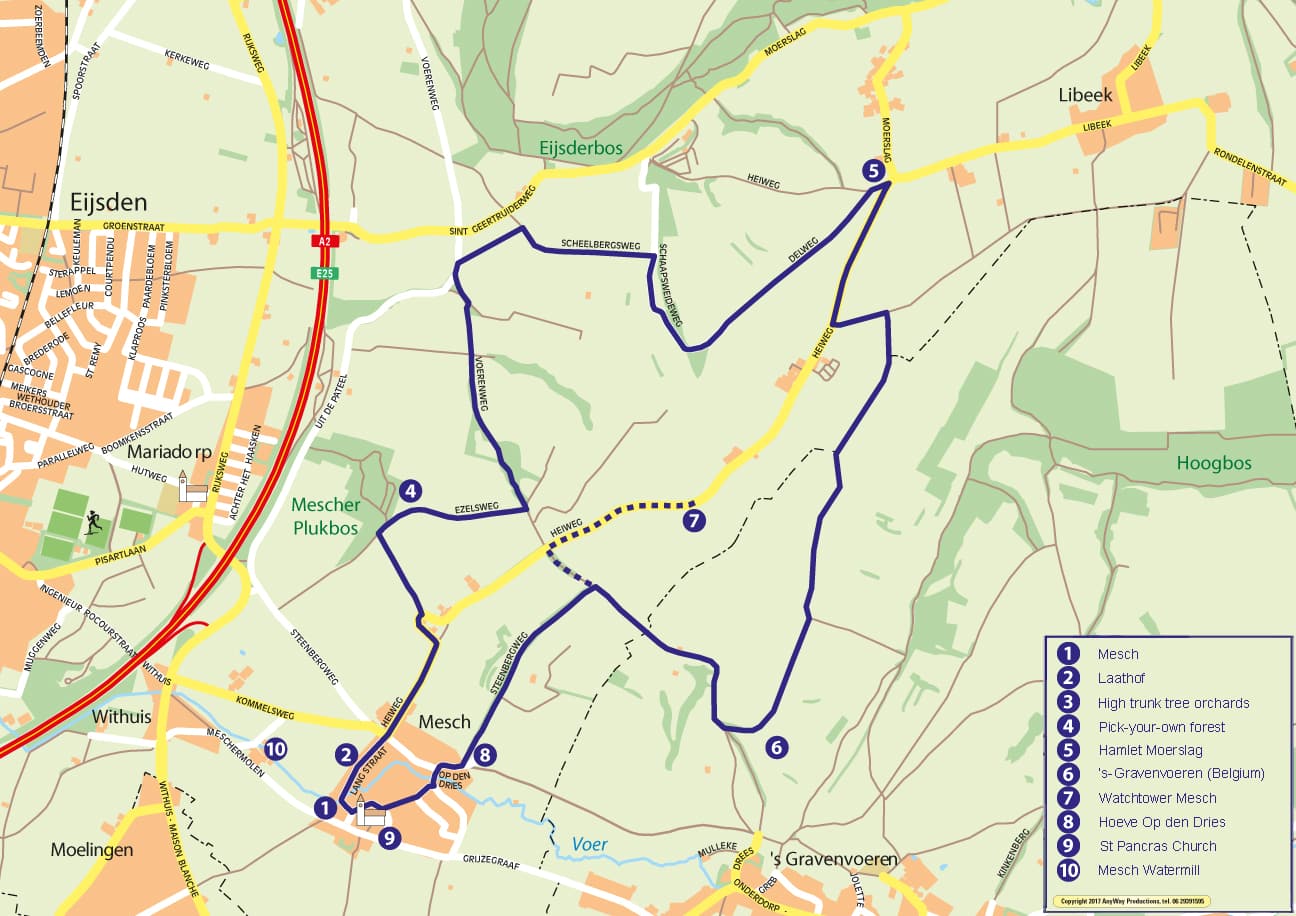 Did you know that Mesch in South Limburg was the very first place in the Netherlands to be liberated from German occupation in 1944? This is where the American army crossed the border from Belgium to the Netherlands on Tuesday 12 September 1944.

Follow the footsteps of the American soldiers during this 9.3km cross-border walk from Mesch to Moerslag to ‘s-Gravenvoeren (Belgium) and back to Mesch. Along the way you will see spectacular vistas, lovely orchards and dozens of shrines and little chapels. This route is partly unpaved and signposted with red-brownish wooden poles.

The walking route starts in one of the southernmost villages of the Netherlands. Mesch has around 400 inhabitants. The small river Voer passes through Mesch. This 12km long river comes from Belgium and drains into the Meuse river (‘Maas’ in Dutch) at Eijsden.

The name Mesch was first mentioned in the year 882, but there may have been a settlement during the Roman Empire. Prehistoric flint objects have been excavated, which indicate that hunters had a workshop and lookout post here some 12,000 years ago. 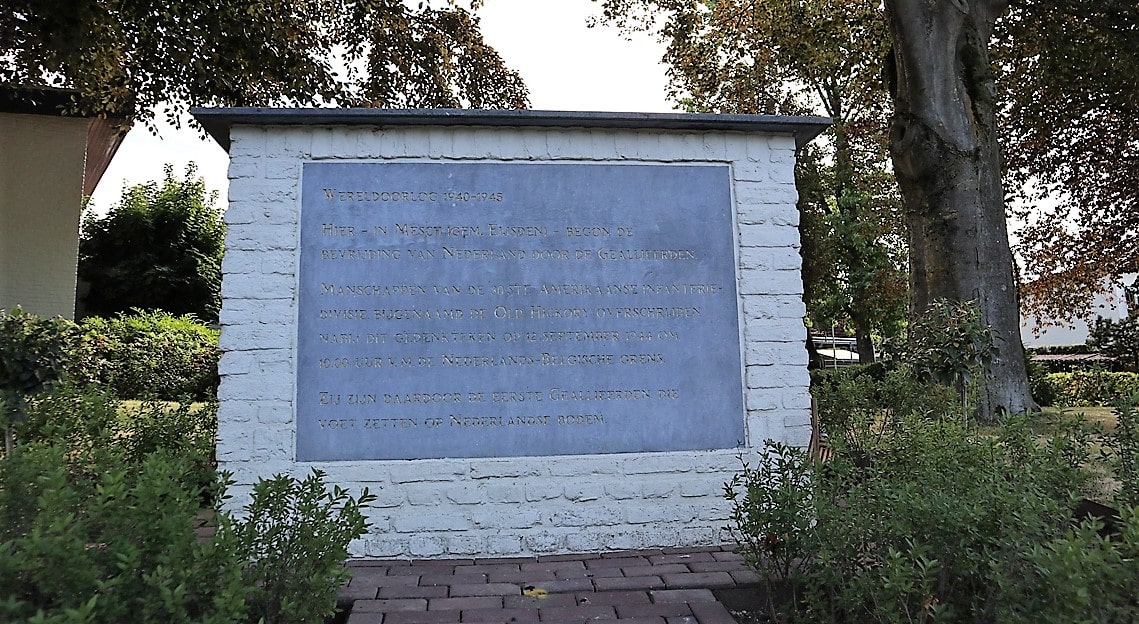 To commemorate the liberation by American troops in 1944 a white bricked memorial was erected at Grijzegraaf, next to the public elementary and opposite Auberge ‘t Koffer. The plaque on the memorial translates into:

Here – in Mesch (Municipality of Eijsden) – the liberation of the Netherlands by the Allies began.

Troops of the 30th American Infantry Division nicknamed the Old Hickory crossed the Dutch-Belgian border near this memorial on 12 September at 10.00am.

They are therefore the first Allies to set foot on Dutch soil.” 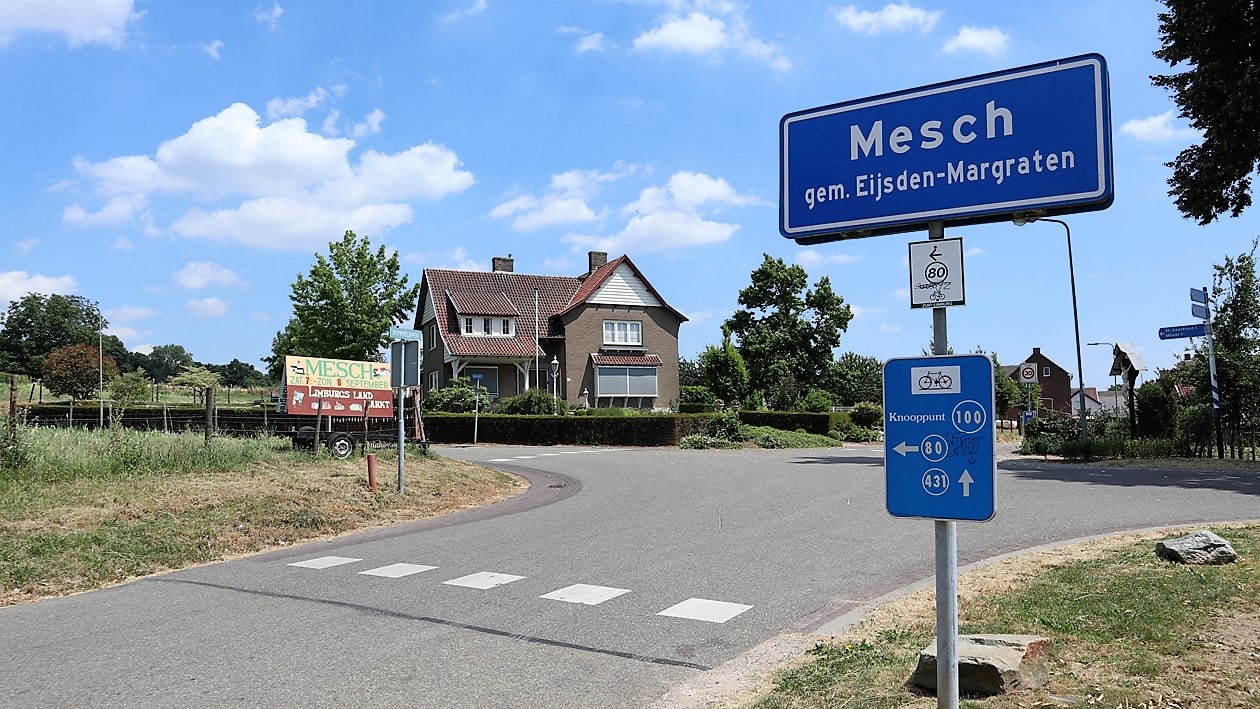 The Laathof at Langstraat 3 is well preserved typical square farmhouse with inner court dating back to 1721. This is where the ‘Laten’ (semi-free citizens) had to pay their duties and taxes. Since 1979 the Laathof has been operating as a restaurant and venue for wedding parties, funeral receptions and other gatherings.

The restaurant is open on Sunday only and serves vlaai (typical pastry from Limburg). The Laathof also provides free walking routes. 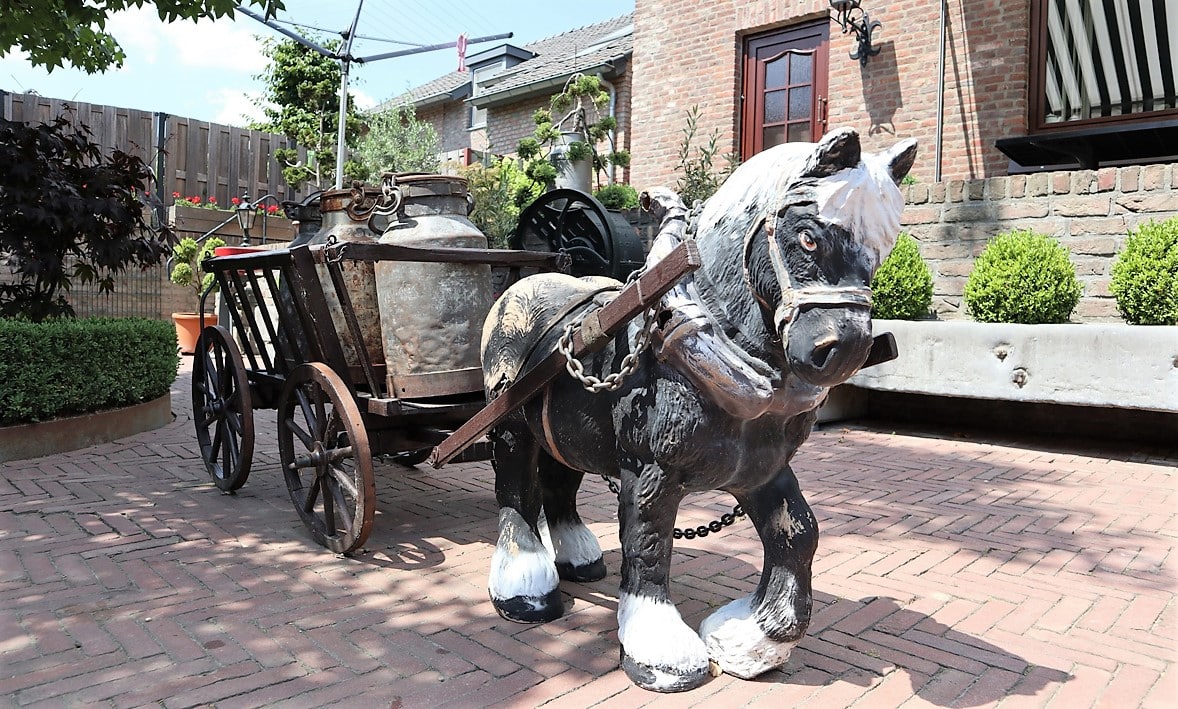 This walking route takes you through a beautiful landscape; from forested slopes to golden wheat fields on hills, picturesque villages and lots of so called high trunk tree orchards. These are trees with trunks starting to branch only at 180 to 200cm height. These can be ornamental trees as well as fruit trees such as apple trees, cherry trees, plum trees and pear trees. Imagine the beauty of these trees when they bloom in springtime!

Northwest of Mesch you will find a new forest where you can pick nuts for free during harvest season. A large variety of trees and shrubs were planted in 2002 and 2003. Many trees in this deciduous forest include chestnuts, hazels and walnuts.

This pick-your-own forest (‘plukbos’ in Dutch) is not only a delight for human visitors, it is also a feast for badgers from nearby fortresses who forage for fallen walnuts and chestnuts during late summer and autumn. Free entrance.

Eventhough the hamlet of Moerslag dates back to the 14th century, there is little known about its history. By the late 19th century Moerslag was hit twice by a large fire, destroying almost all old farm houses. Only one half-timbered farmhouse dating back to 1845 remains today.

The community of Moerslag consists of around 55 inhabitants and 20 homes. There are times when the nearby campground is more densely populated, often with people over 55.

‘s-Gravenvoeren is a linear town along the river Voer, with numerous modern walkways across the river leading to the homes of the townsfolk. Many buildings date to the 18th century, such as the St Lambertus Church.

Behind the church you will find a memorial commemorating the people of ‘s-Gravenvoeren who were killed or have gone missing in the First and the Second World War. The statue depicts a young Belgian soldier looking towards the east, while trampling on a German eagle. Next to the memorial is a liberation tree, which was planted as a freedom tree as early as 1919.

Climb this modern 9 meter tall watchtower on the heath for an amazing panoramic view of the surroundings of Mesch. On a clear day you can see as far as Liege in Belgium, some 20km away. The platform itself has the same shape as the borders of the municipality of Eijsden-Margraten. Information boards provide details the landscape’s past and present.

The watchtower is also part of the Liberation Route Europe (Liberation Route marker 213). If you scan the QR code on your phone, you will get (more) information about what happened at this location 75 years ago.

This distinctive square farmhouse with beautiful courtyard dates back to 1765 and is a national monument. In the late 1970s this was the filming location for the popular TV series ‘Dagboek van een Herdershond’ (‘Dairy of a Shephard Dog’), aired by broadcasting organisation KRO. The farm is now serves as a residence. 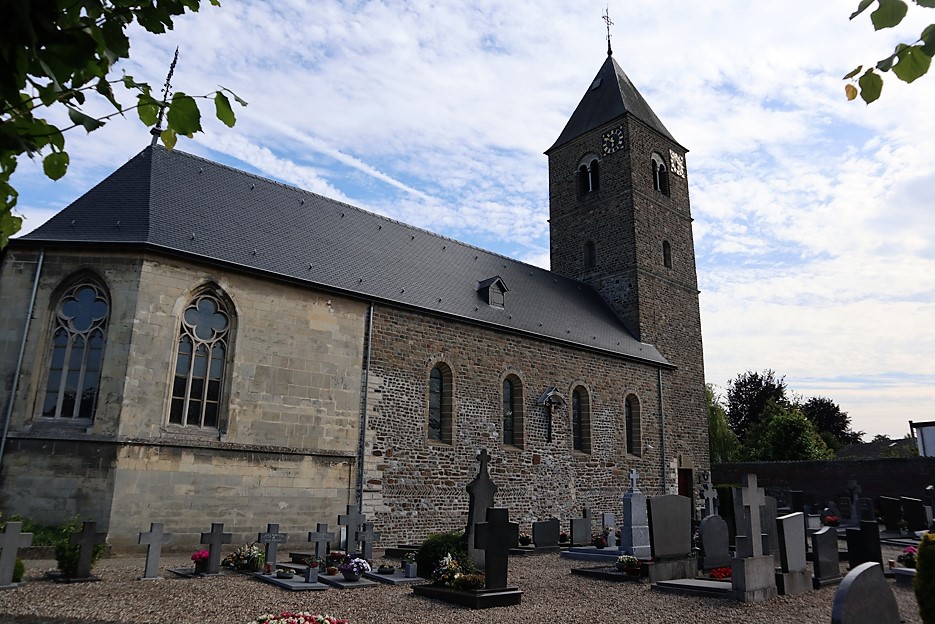 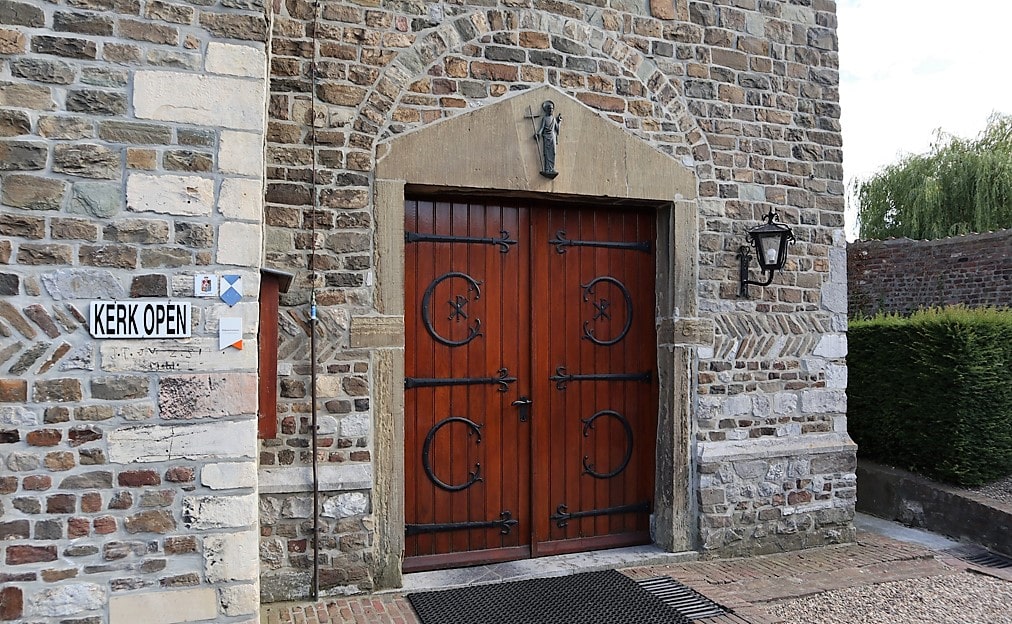 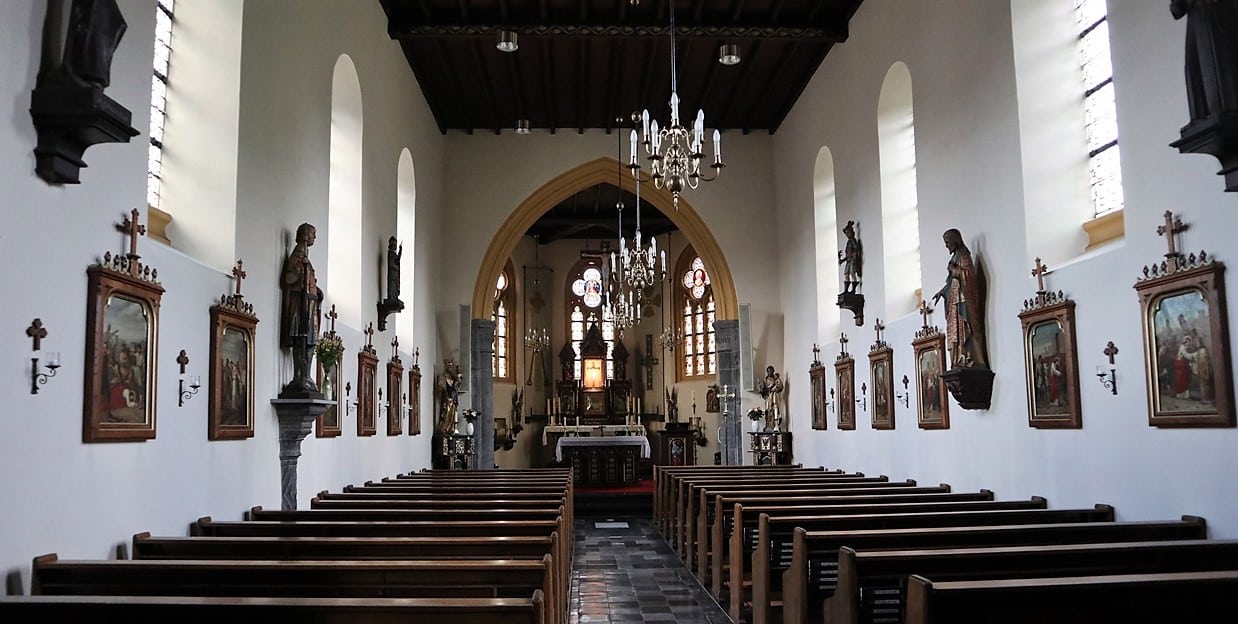 The church was founded around the year 800 and has been expanded, rebuilt and restored over the years. This can be clearly seen in the different building styles and materials. The derelict Roman tower collapsed in 1875 and was rebuilt a few years later. 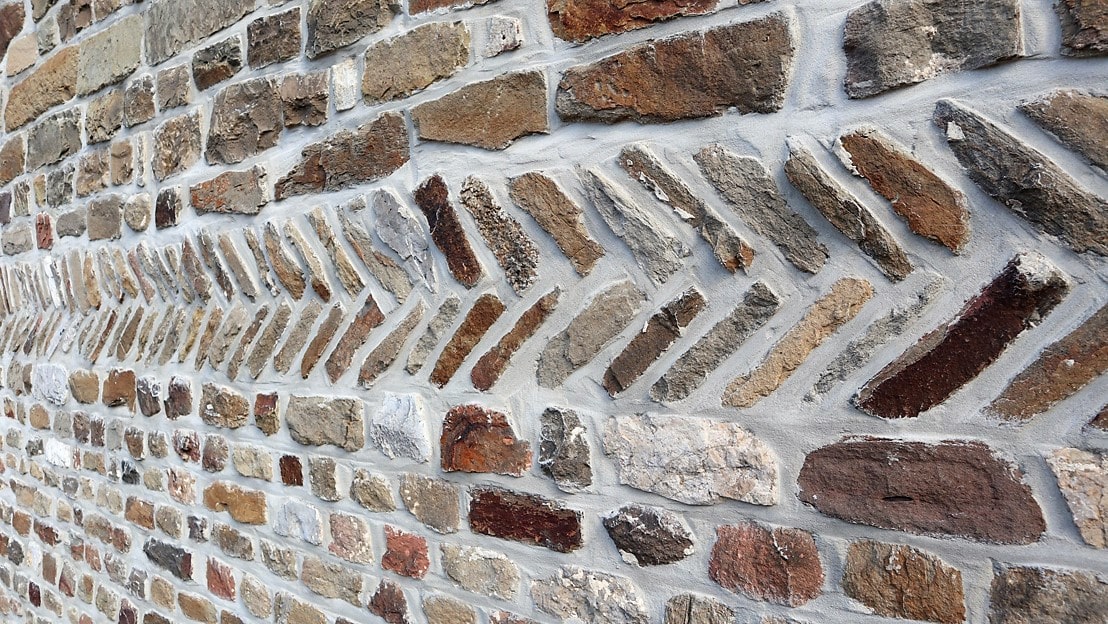 A unique feature for the Netherlands is the Roman herringbone pattern (opus spicatum) in the lower part of one of the outer walls. The organ in the belfry is one of the last handmade organs with a fully mechanical air-regulating system.

The Meschermolen (‘Mesch Mill’) is located in the southernmost tip of Limburg, just a stone’s throw away from the Belgian border. The current appearance of the mill and the farmhouse dates back to 1699, when the half-timbered buildings were replaced by clean brickwork.

Until 1920 the farm was owned by Walloon nobility. Today it serves as a holiday accommodation with appartments and private rooms.

Many thanks to Visit Zuid-Limburg for inviting Heavenly Holland to their region!