After my last blog, I noticed there was a question about the wearing of helmets when traveling by bike. It was specifically mentioned that in London all the cyclists wear helmets when they cycle as opposed to the cyclists in Netherlands. During the last two years I studied in the UK and now I continue my studies in the Netherlands. Even though I did not cycle in the UK I noticed the differences in cycling between these two countries.

The cycling in UK, specifically Boston where I lived, seemed very dangerous to me. There were some cycling paths, however they were all just a different colored parts of main roads where ordinary traffic passed through, including buses and trucks. There was not much space between them and the cyclists and they were quite narrow.

The most dangerous thing that I witnessed was the roundabouts, which in the UK are many of. When a cyclist did not want to go straight, he had to actually get to the inner line in between all the cars. Also, there were no traffic lights for cyclists. They simply had to follow the same lights as cars. This obviously means that when the green light came on everyone including cyclists passed through the crossroad.

I did not see many cyclists in the UK and the few that I saw were always wearing helmets. I absolutely understand why. I found it very dangerous for people to ride there.

When I was moving to the Netherlands my mom told me to buy a helmet and wear it all the time when travelling on my bike.

It is similar in my country and when I was moving here my mom told me to buy a helmet and wear it all the time when travelling on my bike. I admit, because of my UK experience I was scared to ride in the traffic here. But when I came here I saw that it is adapted in such a way that it safe to do so.

I did not see a single person in Netherlands wearing a helmet since I came. Yes, helmets protect you not only from cars but also when you fall, but when addressing the traffic safety there is no need for one in the Netherlands.

I enjoy every ride on my bike and feel safe all the time, without wearing any helmet.

Speaking about roundabouts that I already mentioned, there is an extra outside roundabout around the regular one, which is solely for cyclists. At the crossroads, there are separate lights for cyclists and when they have a green light there is no other vehicle passing through. There is a minimal contact between the cyclists and the rest of the traffic.

I find cycling in Netherlands very safe. I would be scared to go on my bike through the city center in the UK. Here, I do not have any problem at all. I enjoy every ride on my bike and feel safe all the time, without wearing any helmet.

Read Rebeka’s first blog: “No matter the weather I cycle” 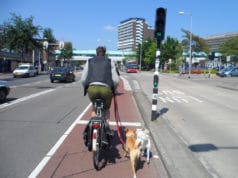 Guest blog: No matter the weather I cycle