Rebeka Zanechalova: “I like living in the Netherlands, however there is a part of my life that I miss here very much. I am a huge ice hockey fan. I used to go to the games in my hometown every week. That’s why when I found out that there was going to be a Division II Championship in Tilburg this year I bought the tickets right away.

It was my Christmas present and I was very excited. I have been to a few championships before, but never to this division. It was the first time that I was about to see teams like Iceland and Australia play.  Also, I knew that Dutch people are generally not that into ice hockey so I wasn’t sure what to expect from the organization part either.

It was finally the day to go. I woke up at 6:00 to catch a train at 8:45. The first game started at 13:00 so I had enough time to go put away my things at the Bed & Breakfast where I was staying and then go to the stadium. That changed when my second train got cancelled and I had to wait for another one. Luckily, I was able to rent a bike at the station when I arrived. I already got used to my bike so well that it feels weird to ride a different one.

The saddle was too high for me, but I managed to get on anyway. I could not reach the ground. But the bigger problem was that I could not even reach the pedals. I fell to the ground quite instantly. I managed to put the saddle lower, but later on, when I was on my way to the stadium I noticed that I did not properly shut the thing and my saddle was moving from side to side as I was cycling.

I arrived at the stadium 15 minutes before the game. There were not many people there. Afterwards, when I was waiting outside for the next game, people started to appear. It was Netherlands vs Belgium. I love the moment when you see people dressed up in different jerseys, having fun and ready to see an ice hockey game. Not only there were many Dutch people, a full bus of Belgium fans arrived as well. When the game was about to start the whole stadium was full, whereas during the first game you would be able to count all the people that were there, as there were so few of them. Now it was an orange sea.

I have to say Netherlands played very well. They won 10:2. It was a lot of nice goals. However, I enjoyed the evening match a lot more. It was very interesting as the teams managed to tie the score three times and ended up playing overtime and even shootout had to take place. I believe every hockey fan loves it when there is going to be a shootout.

I met some nice people who told me a lot about ice hockey in the Netherlands. So now I know where to go next time, when I want to see a good game.

It was a great weekend. Netherlands won the gold with an amazing score statistic of 42 shot goals and only five received. I was a little sad it was over. I saw five matches in total and met some nice people who told me a lot about ice hockey in the Netherlands. So now I know where to go next time, when I want to see a good game. What I really loved from the organizational part was the idea that as a souvenir you could buy a poster that the organizers gave beforehand to different teams to sign. Obviously, I had to buy that.

On the other hand, I was glad I did not have to ride the rented bike anymore and can use my own again. Surprisingly, I arrived at the station back home to find out that someone parked their bike in such a way that his lock was in between my bike and my break cables. So there was no way I could move it without cutting my brakes. I ended up having to rent the same type of bike for another week….” 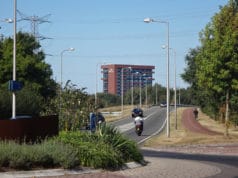