Home Discover Off The Beaten Track The Dutch pyramid of Austerlitz

Did you know that a 36 meter high man-made pyramid can be found at the highest point of Utrechtse Heuvelrug National Park? The Pyramid of Austerlitz was built by Napoleon’s soldiers in 1804.

During the French rule General Marmont set up an army training camp in the center of the Netherlands in 1804. To honor the victories of his close friend Napoleon Bonaparte and to keep his bored soldiers occupied, Marmomt had his 18,000 soldiers build a sand and earth monument inspired by the Pyramids of Giza. Construction took only 27 days. It was named Mont Marmont.

”It would create an effect in this region, for in a flat country like Holland a pyramid of such gigantic dimensions would appear to be a veritable mountain.” —General Auguste de Marmont (1744-1852)

The pyramid of Austerlitz

When Louis Bonaparte became the new monarch of the Kingdom of Holland in 1806, the pyramid was renamed the Pyramid of Austerlitz, despite protests from General Marmont. It was named after the Battle of Austerlitz (1805) which is widely regarded as the greatest victory ever achieved by Napoleon Bonaparte.

The pyramid’s flat top was originally surmounted by a 13 meter high wooden obelisk which soon fell apart and was demolished in 1808. A new stone obelisk was built in 1894. The hastily built pyramid itself was showing signs of aging but was barely renovated.

The pyramid fell into disrepair for much of the 20th century. Until the year 2000 only the stone obelisk atop the pyramid was still visible. For its 200th anniversary the derelict pyramid was restored and reopened to visitors in 2008, along with a new visitor center illustrating the period of French rule in the Netherlands.

The structure is still quite delicate but thanks to the placement of a steel staircase visitors can climb to the top of the pyramid for a spectacular views on a clear day.

To see and to do

Spectacular views
Climb atop the pyramid and see how flat the Netherlands actually is.

Visitors center (free entrance)
Visitors center with a small exhibition and an informative 8-minute movie about the French period of the Netherlands (1795-1813).

Lunapark
With bumper cars, swing carousel and much more.

General Marmont had plans to cover the pyramid with stones. It was also his intention to create a gigantic statue on top of the pyramid, made from cannons that would be conquered in future battles. Both ideas were never carried out.

The Pyramid of Austerlitz was the model for the much larger Lion’s Mound in Waterloo, Belgium. This 43 meter high pyramid was built by King Willem I of the Netherlands as a monument to the Battle of Waterloo of 1815 where Napoleon Bonaparte was defeated.

During the winter season (November-March) both the pyramid and the visitors center are open on Sunday only. 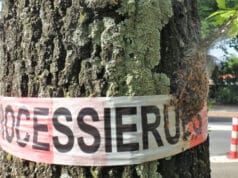 Watch out for oak processionary caterpillars