Did you know that the three windmills (‘Molendriegang’ in Dutch) at Stompwijk date back to 1672? Originally, there were four windmills. The fourth mill was demolished in 1840.

The remaining three windmills (Bovenmolen, Middenmolen and Ondermolen) were taken out of service in 1951. They were no longer need to pump away the water from the polder as this was taken over by electric pumps.

In 1902 the Ondermolen burned down after it was struck by lightning. It was replaced by a new windmill in 1903. Recently the three thatched windmills have been thoroughly restored. Because the windmill in the middle was sagging, a new concrete foundation was installed.

Until 1877 the Driemanspolder was dredged by another nearby Molendriegang as well. The drainage of these three mills was taken over by a steam pump station. Two of the three windmills were sold for demolition. Supposedly the third windmill was intended as a house for the steam pump engineer, but later also demolished.

Did you know that during WWII the three historic windmills were in operation more often than usual? Up to 1700 hours per year.

After World War II the octagonal windmills fell into a state of disrepair and neglect. In 1958 the Province of South Holland acquired the windmills. After years of restoration, on the first National Windmill Day (6 October 1973), the classic line up of three windmills operated for the first time in over 20 years.

Visiting the Molendriegang in Leidschendam

Since the 1980s the iconic Molendriegang of Leidschendam has been in operation on a Saturday afternoon once a month. Unfortunately the windmills are not open to the public. From a distance you can take postcard perfect pictures of these 28-meter high windmills in a typical Dutch landscape with polders.

This hidden gem is within biking distance from The Hague, Delft and Leiden; about one hour of cycling through the scenic countryside. The Molendriegang is a great alternative to Kinderdijk as there are not as much tourists, but then again these three windmills are not open to the public.

Nearby sawmill in Leidschendam

Houtzaagmolen De Salamander is one of the seven still operating sawmills in the Netherlands. During opening hours you can take a guided tour and ask questions about the mill. There are frequent sawing demonstrations. Free entrance, donations are welcome.
location: De Wiek 19, 2265 VK Leidschendam
opening hours: Wednesday and Saturday 14.00-16.00

Location of the Molendriegang in Leidschendam

The oldest 4-star hotel in The Hague: Hotel Corona 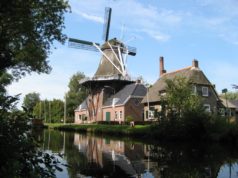