Did you know that these giant wellies were made on the occasion of the Floriade in 2012? The artwork called ‘The boots of the hunter’ is now temporary placed at the Maasboulevard in Venlo before it goes on a ten-year journey.

The artwork was made by artist Pii Daenen on the occasion of the Floriade 2012 expo in Venlo. It symbolizes farmers; down-to-earth, hard-working, one with nature and as a universal feature the rubber boots.

The Floriade is an international horticultural exhibition in the Netherlands. The event is held every ten years. The next Floriade expo will be held in Almere in 2022.

The giant wellies are a temporary replacement for the Sfinx by Fons Schobbers. Early 2014 his glass sculpture was removed from its spot at the Maasboulevard due to irreparable cracks.

A new artwork named Tango is planned to be installed at the same spot in the autumn of 2018. The 10-meter high red steel sculpture is supposed to become a landmark on the Maas river.

Over the next ten years ‘The boots of the hunter’ will travel along various locations in the municipality of Venlo.

The Maasboulevard is a recreational area on the banks of the Maas river in Venlo’s city center. The area has a city park, sidewalk cafes, transient moorage and there are many shops and restaurants nearby. More info about Venlo: www.venloverwelkomt.nl. 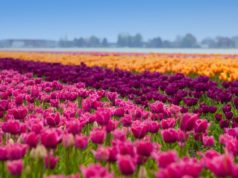 The longest continuous tulip route of the Netherlands 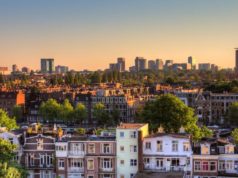